Atlantic Crossing on a Seascape 27?

Our Seascape 27 For Sale

I created a video featuring our Seascape 27 story from the start. I had planned to do a narrated video for a while now. The first part of video sequence is about the pick-up of Norðri from the yard in Slovenia and our cold and foggy maiden voyage. I hope you enjoy …

The next part will be about the naming ceremony and our first cruises.

Capturing the video was actually quite funny. I used the Thanksgiving holidays to dwell a little in good time memories. It felt a little awkward just speaking to myself for the camera though.

Anyhow, in case you struggle with my Germenglish accented – which I’d totally wouldn’t blame you for – I posted what I actually meant to say below; including links to corresponding blog posts.

My dad and I went to pick up Norðri – our brand new Seascape 27 – from Slovenia. It was the beginning of March 2014.

Knut Biehl, the German dealer at the time, was so kind to borrow me his van and trailer. Seascape had just announced a weight adjustment of the boat. It went up by around 150kg compared to the prototype. Few weeks back, I had just gotten a new Audi with a max towing capacity of 1.980 kg. The new announced boat weight was 1.380kg, the weight of the trailer 570kg, leaving only 30 kg for the outboard, cushions and all the other stuff. DAMN!

Positively speaking, I had to wait until an aluminum trailer for a 27 became available and wouldn’t have to worry about where to keep it during the first season at least.

I was so anxious to finally get the boat. I’d ordered her 18 month before – basically of the catalog. I’d been looking for boats for quite a while. My plan was to buy a used boat, or pre-owned as my new countryman would call it. It was supposed to be trailerable, fast, offshore certified, provide sleeps for 4, and have a toilet on board, not just a bucket – Sina insisted. I would have been fine without but if we had to get one, I needed it to be a full marine pump toilet. I was not going to sleep with my head on some chemical lou!

I learned to appreciate this little amenity a lot though. Rainy mornings in northern Germany are plentiful. Every such morning I woke up and had to pee like an ox, I secretly thanked Sina for her persistence.

While searching for a boat, there was one big problem though. I could not find any type of boat that fit the criteria. Category B and trailerable limited the selection tremendously, sleeps 4, not many options left, space for a marine head somewhere else than below the pillow … 0 search results.

As they say, you don’t find the boat, the boat will find you. German “Yacht” magazine was our dating platform. When I read the first article about the Seascape 27 in Sep. 2012, I knew this was it. My boat! The prototype was just afloat. I didn’t even see her in real, let alone sail her.

And there she was, 18 month later. I was so super excited finally hooking her up and taking her back to Flensburg for Biehlmarin to launch and rigg her.

Our maiden voyage was a bit of a stretch. We sailed her from Flensburg to Neustadt; around 160 nautical miles. We weren’t well prepared for the journey. So far, I had only been sailing for 3 weeks in my life. I had the knowledge and some practice to skipper a boat and just passed the German equivalent to a Yachtmaster Coastal Certificate, but totally lacked experience. And for sure, I did not want to damage or wrack our brand new boat.

Lucky for us, a guy called Ole joined us on our first day to Maasholm. He’s one of the trainers Seascape educated. It was good having him on-board showing us how to “sail” the Seascape. Even though, sailing a 27 with a short handed crew is really simple. It is super stable, easy to trim and agile on the rudder.

Ole also showed us how to navigate with the help of GPS and a cellphone from buoy to buoy in foggy conditions. This lesson turned out to be the most important one for our trip.

The weather had actually been the biggest challenge. Forecasted 18 Celsius and 3 Beaufort never happened. This would have been perfect but at the same time unusual conditions for the end of March. We’ve had 1 sunny day out of 4 where the temperature rose above 6 Celsius and managed to clear the fog. The other days were just really wet and bitterly cold.

Sina’s sailing clothes hadn’t been delivered yet and she was going on long underwear, jeans and rain pants. Sitting outside for long hours a day in the fog, being moist and freezing must have been one of her worst outdoor experience in life.

On day 3, we left Wendtorf at 6 in the morning, hoping to make up for the lazy second day. It was dawning but really foggy. We couldn’t even see 50 meters ahead when sailing out of the marina. We told ourselves that the sun will clear it all and the weather would be as beautiful as the day before. DAY DREAMING!

Once we reached deeper waters, we put the sails up. Wind around 2 Bft, no waves; sight about 150 meters. It would have been bearable if the Germany Navy hadn’t planned a huge shooting exercise at sea right on our path. To go round, we would have had to sail all the way to Denmark. OUR MOOD WAS DROPPING.

Well, it would be careless to shoot the big guns on a foggy day like that, so we gave it a try closing in on the boarder of the temporary restricted area to see if something was going on. We almost hit one of the really large yellow-red buoys, as the sight was worsening. There couldn’t possibly be any shooting. With that thought in mind, we set course directly towards Fehmarnsund Bridge.

It was a bit scary actually; not knowing if we somehow just became an active member of a navy maneuver. Anyhow, the wind died completely, the sight worsened to less than 30 meters and we just kept motoring, nothing on the AIS. We were the only retards out on the water … who would have figured.

At some point a horizontal black line appeared on top of us. We would be passing Fehmarnsund bridge in about 30 seconds. Then changing course to our final destination for the day – Großenbrode. The local marina hand’t really opened yet, so no hot-shower, no food nor electricity leaving us in the cold for the night. JUST WHAT WE NEEDED!

On April 1st, after 4 days, we finally arrived at Neustadt, our home port. We were so cold and tired, we didn’t even manage to dock the boat on the floating dock. The absence of dolphins to throw our lines across didn’t seem to make any sense.

I took a very hot shower for at least 30 minutes trying to solve the question whether Sina is ever going to sail with me again. 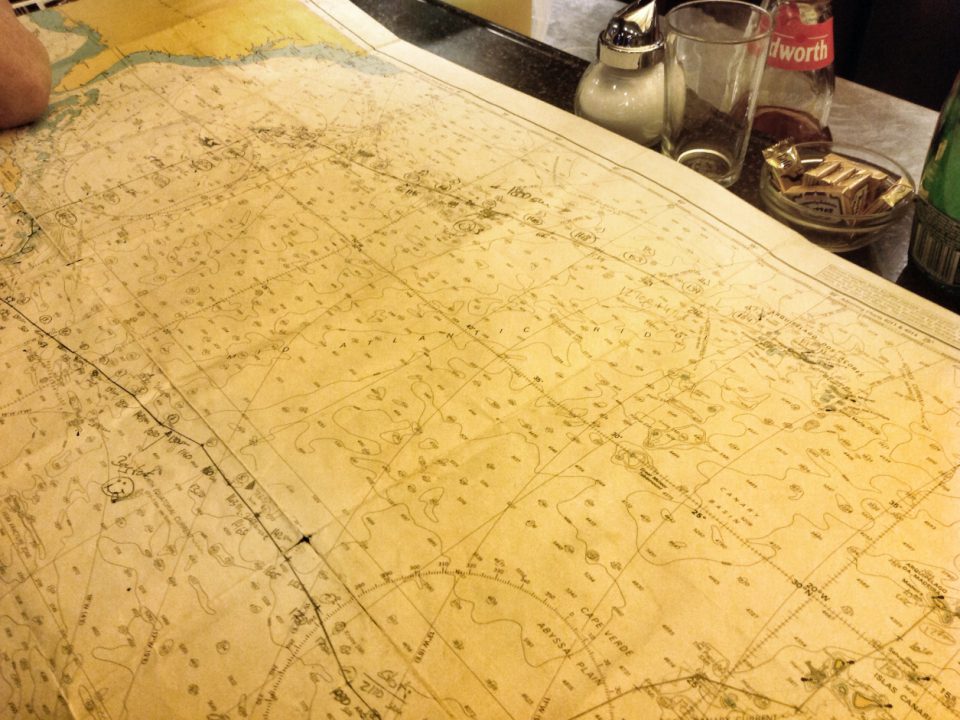 Goods in the cellar