March 2014 in northern Germany: The air started to warm up, sun was shining unusually often, the little bit of snow we’ve got long gone. The thermometer even climbed up above 20°C. Sailors got their boats ready, lively activities in the winter storage. Water temperature still at 5.5°C, but even in a month time, only hardliners are going to take a swim. I’ve read some articles about Winter sailing, how the air smells different, the sounds of nature are somewhat quieter but compelling.

Why wait to the “official” season start April 1st? It’s time for Pre-Season Sailing. Not as hard-core as Winter sailing – maybe enough for starters. This came in handy for us, our goal to have the boat in Neustadt by the beginning of April – for logistical reasons but more importantly to shorten the waiting period. Rasmus thought different and crossed us with not so nice weather. Yes yes … we’ll baptize the boat next week and he’ll get his share of Campaign.

Aside from the weather, some other practicalities should be considered pre-season. Starting with the selection of marinas and available infrastructure all together. A hot shower after freezing for 10 hours in the cockpit or some open gas-station would have come in handy. 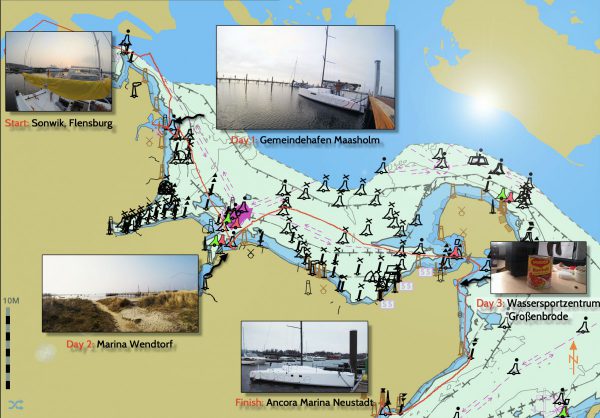 Friday, March 28th: Bustling activity at Sonwik, Flensburg. A lot of boats in the water already, some without a mast still. Folks got their boats ready, cleaning, loading, … Restaurants, shops, and local dealers open to get last minute utilities for the boat. All marina facilities open and operational. Good spot to be – even pre-season. Enough space in the basin to take-off under sails – it’s a sailing boat; motors are generally overrated 😉

Saturday, March 29th: Maasholm, the Marina was mostly operational despite the fact that it’s at a very beautiful and very remote location. Electricity on the piers was partially operational – we got lucky. Working 16A connection directly in front of our boat – nice and warm by electrical heating. Showers accessible with an access card that can be purchased from a automate 10€ payment, including 4€ for shower time and 6€ deposit. a small shop and restaurants in this sleepy place were open. The harbor master nowhere to be seen, but available via phone. Perfect! Looking forward to visit again during summertime.

Sunday, March 30: Marina Wendtorf was accessible but I would not call it “open”. We actually planned to sail to Lippe, another 10nm further in our direction but could not reach anyone there. Harbor guide recommended to ask about the waterway into the marina, as it is sanding-up a lot – so we stayed away. Funny enough, we did some “ground work” in the waterway to Wendtorf though – so could have dared Lippe as well.

We had some rather unstable electricity connection at our spot and also got lucky to get a glimpse at someone who entered the code to the facilities and showers – harbor master had his day off and could not be reached.

We used the motor to get clear from the narrow waterway leading out of the Schlei in the morning. Wind forecasted for Monday was down to 1-2 Beafourt, so we decided to get a refill. Not the easiest in Wendtorf pre-season. Some locals recommended that we walk to Laboe: 30 minutes on foot. We did as we were told for a little over 7 kilometers with a 12 liter tank having about 5 liters of gasoline left. In Wendtorf people seem to walk a lot faster than in Lower Saxony.

Overall a nice location, especially the beaches and the view. It’s located in a preservation area with dunes and marram grass. 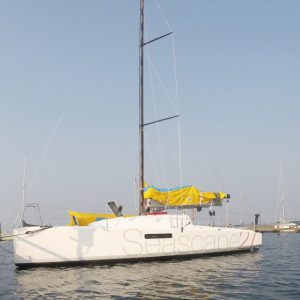 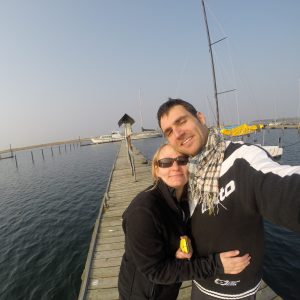 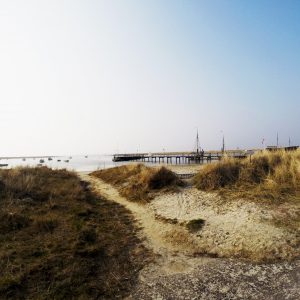 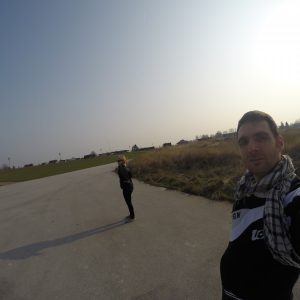 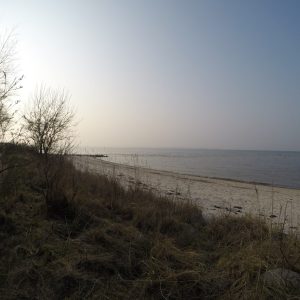 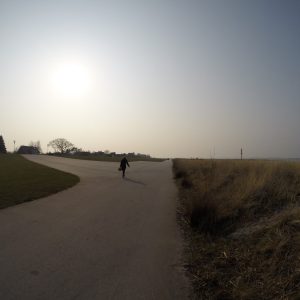 Monday, March 31st: A disaster – Rasmus must have had a bad day … As we only sailed a little over 20nm the day before, we had to get up early to catch up. Destination Großenbrode. 10 hours after freezing in air with 100% humidity, sight down to 30 meters and even less wind than forecasted, we reached the “Water Sport Center  Großenbrode” – I guess this is what the place is called at least.
Wind picked up right before we entered the harbor – giving us some exiting times with cross-winds while trying to fit between two dolphins about as far apart as the width of our boat. The first one, we hit kind-of ok but figured there was no electricity. So once again into a different box. We have had around 10-20 cm water below the keel getting less with every second the wind kept blowing us further inside the harbor.

Somewhat tight, electricity in place payable in 1€ coins. Heating could only run in eco mode – lines not stable though barely any other boat consumed anything. Next concern, getting warm – a shower the only way to get there. The pier was secured by an iron door that could only be opened from seawards – but for sure harbor master will hand us a key.
Far wrong! He had his day off, no phone number to call. The associated Restaurant takes care of business in his absence – CLOSED! No automate; toilets and showers closed. No food – damn!

Ok, back to our boat as long as someone can open the door to the pier. Next, gasoline. We used the motor for 5 hours and were in for little wind the next day again. Same game, folks said the next gas station is about 2 km away … it’s almost 4 km – but why should I be surprised. Boat cold and moist from the inside. Ceramic heater in eco mode could not make up for it.

Around 8pm: electricity gone?! Outage, or have we actually used our € already? No 1€ coin left anymore to try. Nobody around to ask for exchange. Oh what a day! Last resort: half a Beer (Flensburger) left-over from Wendtorf and our sleeping bags – Penguine style. 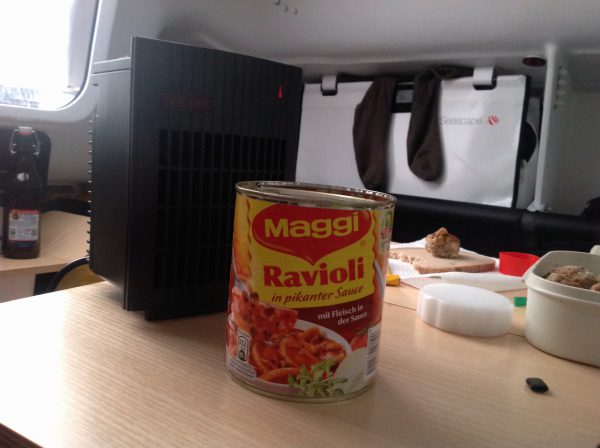 Monday, April 1st (start of the Season): We reached our home part the Ancora Marina in Neustadt. Finally … completely exhausted. The marina was fully operational, some people even helped us to berth as we didn’t know how – weird system (no clamps or dolphins). We learned that someone has to jump overboard onto the pier. Anyways … finally at home cold and wet to the bone! The bright side is that we have unlimited access to very nice and hot showers.